O God, who wonderfully created, and yet more wonderfully restored, the dignity of human nature: Grant that we may share the divine life of him who humbled himself to share our humanity, your Son Jesus Christ; who lives and reigns with you, in the unity of the Holy Spirit, one God, for ever and ever. Amen.
~Various Occasions, Collect no. 4: Of the Incarnation

Among the things that I have been learning in my readings over the last year or so, one recurring idea is that of the Incarnation as central to the Anglican identity and understanding of the faith.  The results of recognizing Incarnational theology as the foundation of the faith are many and significant.  One result for me has been an embracing of the tangible and physical as redeemed and good.  This is a desire that has always been present in me (and, I think, in humanity generally), but was for years tempered by my Protestant upbringing.  I read a statement a while back about the latent and unacknowledged Gnosticism that pervades much of Protestantism.  It is the dualism of the Gnostic that says, "The spirit alone is good, the flesh is evil."  Many Protestants would not baldly make such an extreme assertion in their theology (some would), but the results are manifest nonetheless.  Compare the sparse, utilitarian "meeting house" of the Protestant with the glittering, liturgy-steeped cathedral of the Catholic.  "Bah, rags of Popery!  Enticing and deceiving the ignorant masses with all those 'smells and bells', the sensuality of it all!"  To which the catholic Christian answers, "Christ has come and fully embraced our humanity, our earth and time-bound existence.  God became man, was born, lived as one of us, died, and was reborn out of death.  In so doing, He has hallowed our humanity, and all creation with us.  As it was in the beginning, so it is now again: 'It is good'."

Now, it is obviously true that we still live beset by the corruption of this fallen world and must continually "persevere in resisting evil"; to suggest otherwise is to be blind to the daily reality of sin, to look on evil and claim that it is actually good and we just don't yet recognize the goodness (what C.S. Lewis called "talking damned nonsense").  I am not advocating a feel good theology that refuses to acknowledge that there is evil in the world; yet the great work of redemption has been accomplished already. Christ the second Adam has reconciled humankind to God by becoming one of us, and through an act of entire self-giving has filled all in all.

And so, out of the goodness of His creation, we bring Him the best we can offer.  Yes, we seek to move beyond the purely temporal as we draw nearer to God in Christ, but we do not reject the temporal in the process.  God did not redeem us by rejecting the temporal to affect our salvation by some purely spiritual act "somewhere out there." He came to us in the here and now.  It is here and now that we exist, and so we worship with our bodies as well, with our minds, with our voices, with our gifts, be they literary, musical, architectural, etc.  We bring all we are before God as an offering.  And we glorify Him in the here and now, where He has placed us to be a channel of His Love in the midst of this physical Creation.

A simple example of this embracing of the tangible is the use of prayer beads, a tradition that stretches back centuries through the saints.  I ordered mine online from the Solitaries of DeKoven; one of the hermits makes them as a ministry and form of livelihood for the order; each one is crafted in prayer.  I've been using them in my times of personal prayer for about a month now.  I also just read a small book (a pamphlet, really) by Lynn C. Bauman entitled The Anglican Rosary.  The book consists primarily of sample prayers, which also serve as examples to inspire the reader in composing their own prayers.  But it also includes an introduction to the history of the Rosary, and an explanation of its symbols.  The Anglican Rosary is rife with symbolism, much of it focused on numbers which have deep significance in Scripture: the circle of the beads represents eternity, even while our praying through the cycle of beads mirrors our earthy pilgrimage; the four cruciform beads make the symbol of the cross; the four "weeks" or series of seven beads make up the majority of the prayers, recalling the seven days of creation, and the seven seasons of the church's liturgical year; the rosary is prayed through three times, bringing the number of cruciform prayers to twelve; the total number of beads is thirty-three, the number of years of Christ's earthly life; and on and on. 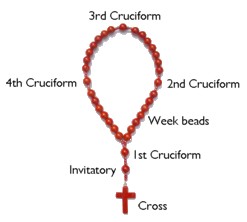 In many ways, the Rosary also mirrors the liturgical year of the church, which is itself an acknowledgement of the redemption of the created order, the seasons which govern our life.  But in the liturgical year, the church consciously marks time by a recognition of the sacred, the major events of that supreme event, the life of Christ.  In so doing, we are able to see the deeper truths to which the whole created order points.  I think Bauman sums this up beautifully.  For example, she writes:

"Because the seasons of the Liturgical Year are strategically placed around the four cardinal points of the solar year, we can more easily grasp their spiritual significance.  For example, the Feast of Christmas falls on and replaces the ancient feast of Winter Solstice, the longest night of the year, when the Sun makes its turn back toward the longest day.  This ancient, pagan feast signified the birth of Light into the world and the return to light from darkness.  It is fitting, therefore, that Christmas should be celebrated here as well, since it stands for the birth of the Divine Light into the great darkness of the world.  Another example, Easter falls on or around Spring Equinox when light 'conquers' darkness, so to speak, and the days are now longer than the night.  Pentecost is celebrated on or near the Summer Solstice, the longest and brightest day of the year.  Briefly then we can understand the spiritual symbolism inherent in each season."

Another point Bauman makes is that we can view praying the Rosary as "a little office".  This has been especially helpful to me.  I love to pray the daily office (using the rites in The Book of Common Prayer), but since the arrival of our third child, this is not always easy.  Very often the times when I have opportunity to pray are times that I am holding a little one in my arms.  Viewing the Rosary as a modified form of the daily office comes in handy in such a situation.  Bauman cites Robert Llewelyn here:

"It is best to see the saying of the Rosary as an offering ... The Rosary is, in fact, a Little Office.  It has the great advantage of simplicity.  No books, no distractions in searching for hymns, antiphons, psalms and lessons, and the Rosary itself can be easily carried wherever we go."

As I said, I love the daily office, and I certainly don't intend for the Rosary to replace it over the long term, but it has been a blessing for me in this season.  I close now with a sample prayer from Bauman's book that I find particularly beautiful and powerful.  It's also particularly appropriate for the approaching Feast of the Transfiguration of Our Lord.  Peace.

A Rosary of Image and Likeness

Crucifix:
In the Name of Christ,
The Alpha and Omega,
Our Origin, our Destiny, and End.

Invitatory Bead:
When anyone turns to the Lord
the veil is removed.
For the Lord is the Spirit,
and where the Spirit of the Lord is,
there is freedom.
And we who gaze with unveiled faces,
reflecting the glory of the Lord
are being transformed into the same image
from one degree of glory to another.
All this comes from the Lord, who is Spirit.

Cruciform Beads:
And I, when I awaken,
Shall see your face, my God,
I shall gaze upon your image and be satisfied.

The Weeks:
I descended in your image,
I remain here in your love,
In your likeness at last I shall ascend.
Posted by Rob Scot at 8:03 PM