In Honor of Our Lady 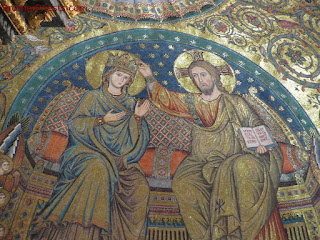 O God, you have taken to yourself the blessed Virgin Mary, mother of your incarnate Son: Grant that we, who have been redeemed by his blood, may share with her the glory of your eternal kingdom; through Jesus Christ our Lord, who lives and reigns with you, in the unity of the Holy Spirit, one God, now and forever.  Amen.
~Collect for the Feast of Saint Mary the Virgin

In the liturgical calendar, August 15 is a major feast in which the Church honors Mary, the Mother of Our Lord.  In the Roman Catholic tradition, the day is known as the Assumption of Mary, referring to the belief that Mary was assumed bodily into heaven when her earthly life was ended.  Essentially the same doctrine is held in Eastern Orthodoxy, where the feast is called the Dormition (i.e. falling asleep) of Mary.  In the Anglican tradition, the day is simply known as the Feast of Saint Mary the Virgin (or some similar title), since the Assumption is not a doctrine promulgated in Anglicanism, though there are certainly Anglicans who hold the belief.  In any event, Anglicans appropriately recognize the place of unique honor which Mary has been granted by virtue of her humble obedience to God and integral role in the central event of all history.

I like the following excerpt from Lesser Feasts and Fasts, as I think it well expresses our via media within the Church universal on this point:
"Later devotion has claimed many things for Mary which cannot be proved from Holy Scripture.  What we can believe is that one who stood in so intimate a relationship with the incarnate Son of God on earth must, of all the human race, have the place of highest honor in the eternal life of God."
The text concludes by referencing a verse of the hymn Ye Watchers and Ye Holy Ones: