O God, whose blessed Son didst manifest himself to his disciples in the breaking of bread: Open, we pray thee, the eyes of our faith, that we may behold him in all his redeeming work; through the same thy Son Jesus Christ our Lord, who liveth and reigneth with thee, in the unity of the Holy Spirit, one God, now and forever.  Amen.
~ Collect for the Third Sunday of Easter

Two readings from the ancient Fathers, which are appropriate for Easter, and which I have found inspiring.  First, from a sermon by Saint Ephrem the Syrian.  I'm always delighted by the way in which the Fathers see the whole of Scripture as turning upon and pointing to the supreme event of the life, death, and resurrection of Jesus Christ.  I also love the triumphant Christus Victor understanding of the work of Christ, so prominent in the early Church.  Alleluia!  Christ is risen!

From Saint Ephrem the Syrian:


"Our Lord was trodden underfoot by death, and in turn trod upon death as upon a road.  He submitted to death and endured it of His own free will, in order to destroy death against death's will.  For our Lord went out carrying His cross, according to death's wish; He cried out on the cross and led the dead out from hell, against death's wish ...

And so, since death could not devour Him without a body and the world of the dead could not swallow Him up without flesh, He came to the Virgin, so that He might receive from her a chariot on which to ride to the underworld.  In the body He had assumed He entered death's domain, broke open its strong-room and scattered the treasure.

But Mary blossomed, the new vine compared with the old vine, Eve.  Christ, the new life, lived in her, so that when death, brazen as ever, approached her in search of his prey, life, the bane of death, was hidden within her mortal fruit.  And so when death, suspecting nothing, swallowed Him up, death set life free, and with life a multitude of men.

This glorious son of the carpenter, who set up His cross above the all-consuming world of the dead, led the human race into the abode of life.  Because through the tree the human race had fallen into the regions below, He crossed over on the tree of the cross into the abode of life.  The bitter shoot had been grafted on to the tree, and now the sweet shoot was grafted on to it so that we might recognize the One whom no creature can resist.

Glory to you!  You built your cross as a bridge over death, so that departed souls might pass from the realm of death to the realm of life.  Glory to you!  You put on the body of a mortal man and made it the source of life for all mortal men.  You are alive!  Your murderers handled your life like farmers: they sowed it like grain deep in the earth, for it to spring up and raise with itself a multitude of men."          ~ Saint Ephrem, Sermon on our Lord, 3-4.9 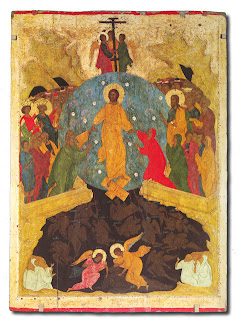 Having "set up His cross above the all-consuming world of the dead", Christ grasps Adam and Eve to lead them "from the realm of death to the realm of life."

And here is Origen, reflecting on "the ransom", a common theme in patristic writings on the atonement:


"But to whom did He give His soul as a ransom for many?  Surely not to God.  Could it, then, be to the Evil One?  For he had us in his power, until the ransom for us should be given to him, namely the soul of Jesus; and he had been deceived, and led to suppose that he was capable of mastering that soul, and he did not see that to hold Him involved a trial of strength greater than he was equal to.  Therefore also Death, though he thought he had prevailed against Him, no longer lords it over Him, He having become free among the dead, and stronger than the power of death, and so much stronger than death that all who will amongst those who are overcome by death may also follow Him, death no longer prevailing against them.  For everyone who is with Jesus is unassailable by death.                   ~Origen, Commentary on Matthew xvi. 8

It's interesting to me that Origen's concluding remarks here represent essentially my own attempt to explain the resurrection to my young children.  More than once, when we've talked about the meaning of Easter, I've said something to the effect of, "Because Jesus was raised to life, it means He is stronger than death.  And since we are with Jesus, we don't need to be afraid of death either."

A question for the reader (if I may be so presumptuous): When we seek to explain a spiritual truth (e.g. the atonement, the Trinity, the Eucharist) to an inquiring child, should we expect to find ourselves coming nearer to the heart of the matter than we might in a "mature, adult conversation", or is it more likely that we shall find ourselves trying to convey complex, theological doctrines in a simplistic manner that does not adequately plumb the depths of deep concepts which deserve nothing less than a lifetime of reflection? I am not suggesting that we shouldn't try to impart the faith to our children in terms that they can understand. I am wondering if we should generally look to such conversations as valuable distillations of essential truth, or rather be wary of them as attempts to state simply truths which are not in fact simple. I suppose I am here asking that ancient question posed to our Lord: What is truth? Is it by nature simple or complex?