Saint Patrick, Devoted to Christ "at the Margins"

The above is a hymn of praise that is not from the time of Saint Patrick, nor is it Irish (of course, neither was Patrick himself originally; he was born a Roman Briton in what is today Wales).  Nonetheless, I think it well reflects the spiritually of the patron saint of Ireland, a spirituality that is broad and embracing, knowing God as both intimate daily companion and Lord of Creation, praised by all that is.

The success of Thomas Cahill's book How the Irish Saved Civilization, is well deserved.  It is a wonderful little book, beautifully written in a way that makes scholarship accessible to a broad audience.  The excerpts below are from the chapter in that book entitled, "Good News from Far Off: The First Missionary".


Patrick really was a first -- the first missionary to barbarians beyond the reach of Roman law.  The step he took was as bold as Columbus's, and a thousand times more humane.  He himself was aware of its radical nature.  "The Gospel," he reminded his accusers late in his life, "has been preached to the point beyond which there is no one" -- nothing but the ocean.  Nor was he blind to his dangers, for even in his last years, "every day I am ready to be murdered, betrayed, enslaved -- whatever may come my way.  But I am not afraid of any of these things, because of the promises of heaven; for I have put myself in the hands of God Almighty."

According to Cahill, Patrick was not only the first true missionary beyond the borders of the Roman Empire,  he was also "the first human being in the history of the world to speak out unequivocally against slavery."  Surely, Patrick's own experience as a slave in Ireland played a part in his unmitigated condemnation of slavery.  That experience during his formative years, which also occasioned his conversion, wrought in Patrick an unswerving devotion to Christ and a "core of decency" that was to serve him well in his mission to the Irish.  For, says Cahill, Patrick was at heart "a good and brave man, one of humanity's natural noblemen."  As with all such men and women, he stands out as one who did not conform to many of the conventions of the day, especially if they were an offense to justice and humanity.


His love for his adopted people shines through his writings, and it is not just a generalized "Christian" benevolence, but a love for individuals as they are.  He tells us of a "blessed woman, Irish by birth, noble, extraordinarily beautiful (pulcherrima) -- a true adult -- whom I baptized."  Who could imagine such frank admiration of a woman from the pen of Augustine?  Who could imagine such particularity of observation from most of those listed in the calendar of saints?

He worries constantly for his people, not just for their spiritual but for their physical welfare.  The horror of slavery was never lost on him: "But it is the women kept in slavery who suffer the most -- and who keep their spirits up despite the menacing and terrorizing they must endure.  The Lord gives grace to his many handmaids; and though they are forbidden to do so, they follow him with backbone."  Patrick has become an Irishman, a man who can give far more credibility to a woman's strength and fortitude than could any classically educated man.

In his last years, he could probably look out over an Ireland transformed by his teaching.  According to tradition, at least, he established bishops throughout northern, central, and eastern Ireland: he is primatial bishop at Ard Macha (modern Armagh), a hill away from Emain Macha, seat of the Ulster kings ... By placing his bishops next door to the kings, Patrick hoped to keep an eye on the most powerful raiders and rustlers and limit their depredations.

With the Irish -- even with the kings -- he succeeded beyond measure.  Within his lifetime or soon after his death, the Irish slave trade came to a halt, and other forms of violence, such as murder and intertribal warfare, decreased.  In reforming Irish sexual mores, he was rather less successful, though he established indigenous monasteries and convents, whose inmates by their way of life reminded the Irish that the virtues of lifelong faithfulness, courage, and generosity were actually attainable by ordinary human beings and that the sword was not the only instrument for structuring a society.

Though Patrick's immense influence on his adopted homeland is widely recognized today, Cahill writes that, "In his own time, only the Irish appreciated him for who he was."  In fact, when the tables turned later in the century and the kings on the western coasts of Britain began slave-raiding into Ireland, Patrick's attempts to halt the practice by appealing to his Briton brethren's Christian faith went largely ignored.  Patrick laments, "Can it be that they do not believe that we have received one baptism or that we have one God and Father?  Is it a shameful thing in their eyes that we have been born in Ireland?"   In fact, the British eventually respond to Patrick's "meddling" by seeking to discredit him through a smear campaign.  It is in this context that Patrick writes his Confession, the primary source of our information about him.  In assessing Patrick's confrontations with the people of the land of his birth, Cahill writes:


Patrick, whose awkward foreignness on his return to Britain had been the cause of numerous rebuffs,  knows in his bones the snobbery of the educated Roman, who by the mid-fifth century had every right to assume that Roman and Christian were interchangeable identities.  Patrick, operating at the margins of European geography and human consciousness, has travelled even further from his birthright than we might expect.  He is no longer British or Roman, at all.  When he cries out in his pain, "Is it a shameful thing ... that we have been born in Ireland?" we know that he has left the old civilization behind forever and has identified himself completely with the Irish.

In Saint Patrick, we have more than mere legend.  We have a life lived honestly, faithfully, compassionately, and sacrificially.  It is a life that stands out, both in the Church and in human history, such that it rightly becomes legendary.  Cahill concludes,


In becoming an Irishman, Patrick wedded his world to theirs, his faith to their life.  For Augustine and the Roman church of the first five centuries, baptism, the mystical water ceremony in which the naked catechumen dies to sin, was the foundation of a Christian life.  Patrick found a way of swimming down to the depths of the Irish psyche and warming and transforming Irish imagination -- making it more humane and more noble while keeping it Irish.  No longer would baptismal water be the only effective sign of a new life in God.  New life was everywhere in rank abundance, and all of God's creation was good.  The druids, the pagan Irish priests who claimed to be able to control the elements, felt threatened by Patrick, who knew that a humble prayer could even make food materialize in a barren desert -- because all the world was the work of his Creator-God.

Almighty God, whose will it is to be glorified in your saints, and who raised up your servant Patrick to be a light in the world:  Shine, we pray, in our hearts, that we also in our generation may show forth your praise, who called us out of darkness into your marvelous light; through Jesus Christ our Lord, who lives and reigns with you and the Holy Spirit, one God, now and forever.  Amen.
~ The Book of Common Prayer, from the Common of Saints, Of a Missionary 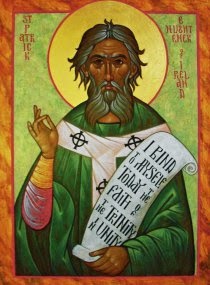