Mary in the Episcopal Church

I recently became a member of the Society of Mary, an Anglican devotional society.  The Society was founded with the following objects:

1. To love and honor Mary.
2. To spread devotion to her in reparation for past neglect and misunderstanding, and in the cause of Christian Unity.
3. To take Mary as a model in purity, personal relationships, and family life.

Over the last couple of years I have been increasingly drawn to greater appreciation and love for the Blessed Virgin Mary in my own devotional life.  I discovered the Society about a year ago, and it was primarily that discovery which inspired me to begin implementing some Marian devotions into my prayer life.  I pray the Angelus daily (it has been helpful that the Lutheran church behind our house rings its chimes at six o'clock every evening!) and usually end Evening Prayer with the seasonally appropriate Marian anthem.  I have only recently become a member because I did not initially realize that the Society, which was formed in the Church of England in 1931, has an American Region.  Incidentally, one of the things I noted in exploring their website was that the Society has cells and wards affiliated with both the Episcopal Church and various North American Anglican churches that have left TEC.  I'm interested to find out more, but such communion among these churches, on any level, is rare these days.  This seems to me an encouraging example, and a demonstration of the Blessed Virgin and devotion to her serving "in the cause of Christian Unity."

In keeping with the objects of the Society, I thought to publish a post about "Mary in the Episcopal Church".  I recently found a pamphlet by that name, published by Forward Movement, as I was looking for resources for a family member who is curious about what Episcopalians believe about the Blessed Virgin Mary.  Of course, stating what Episcopalians believe about anything has, unfortunately, become famously tricky in recent years (though, as I've noted in various previous posts, what Episcopalians believe can be most definitively expounded by reading The Book of Common Prayer, regardless of what idiosyncrasies or aberrations one may find in individuals and parishes).  Accordingly, attempting to explain Mary in the life of the Episcopal Church in a mere eight pages is rather ambitious, but as a brief, introductory pamphlet, I felt it was mostly satisfactory.

In the words of the introduction, the pamphlet "offers a guide to Episcopalians seeking a deeper understanding of Mary as mother, disciple, role model, and sister in Christ."  These roles of Mary provide the headings by which the text is organized.  There are also headings of The Annunciation, The Visitation, Mary and Salvation, Mary and Worship, Society of Mary (Anglican), and Prayers.  I do have two criticisms that I believe are significant: one concerning the section Mary as Mother, and one concerning a noticeable omission.

First, while affirming Mary as mother of Jesus, the pamphlet states that "for Episcopalians, 'Virgin Birth' is not necessarily a term describing a medical condition.  The Bible is the story of God's presence in human history, not a scientific manual."  It then refers to scholarly debate about the meaning of the word "virgin" as it is used in various passages in Scripture.  The text continues: "Whatever one concludes, for the authors of Matthew's and Luke's gospels, portraying Jesus' birth as unique is a way of proclaiming that in Jesus God has done something unprecedented: God has entered human life in an extraordinary way and created a new relationship with us."  While I don't technically disagree with any of the preceding assertions, I find it strange and a bit troubling that the author(s) felt it appropriate to cast doubt on the traditional understanding of the doctrine of the Virgin Birth in a pamphlet of this size and scope.  It seems to me quite outside the realm of the parameters and context that the pamphlet sets for itself.  And while it is true that "virgin" can be a fairly ambiguous term in some Scriptural passages, the same cannot be said for the gospel accounts (e.g. 'How will this be,' Mary asked the angel, 'since I am a virgin?' Luke 1: 34).  I think it is misleading to imply that the gospel writers meant to leave this issue vague or open to various, symbolic interpretations.  And it is undeniably true that the Church, from the earliest centuries down to the present, has affirmed in its official teaching what the gospel writers make unambiguous: that Jesus did not have a human father, but was conceived in (Mary) from the Holy Spirit (Matt. 1:21).

The second criticism is not unrelated to the first.  I was surprised that nowhere in the pamphlet was there reference to Mary as Theotokos (the God-bearer, or "Mother of God").  This title is important.  Indeed, it is this understanding of Mary that truly sets her apart from all other saints (and, not incidentally, helps prevent what I would consider a 'low view,' or potentially even unorthodox understanding, of the Incarnation, such as I have just criticized).  It helps us understand that though she is indeed a model as mother, disciple, and sister in Christ, Mary is also much more: she is the one through whom the eternal God chose to be born as truly human, the one through whom the Word became flesh and dwelt among us (John 1:14).  This Incarnation is an astounding thing which, once believed and pondered, makes it all but impossible to view the Blessed Virgin Mary as simply one among many saintly examples.  She is not divine, of course, but she is wholly unique as the true mother of our Lord.  And to acknowledge Mary as Theotokos is to confess that Jesus Christ is truly God and truly Man.  In the early Church, there were a number of competing theories that challenged this orthodox understanding of who Jesus was (e.g. that Jesus was simply a great exemplary man, or was more than human but less than God, or was a man "adopted" by God's Spirit at some point in his earthly life, or was not truly human but merely appeared to be so, etc.).  It was in response to these heresies that the great Fourth Ecumenical Council, at Chalcedon in 451 A.D., issued the most definitive confession regarding the person of Christ.  In powerful and wonderful language (an excerpt of which is contained in The Book of Common Prayer, pg. 864) the Council declared:


"Therefore, following the holy fathers, we all with one accord teach men to acknowledge one and the same Son, our Lord Jesus Christ, at once complete in Godhead and complete in manhood, truly God and truly man ... as regards his Godhead, begotten of the Father before the ages, but yet as regards his manhood begotten, for us men and for our salvation, of Mary the Virgin, the God-bearer (Theotokos)."

In summary, I am glad that I was able to find a pamphlet to introduce Episcopalians and curious others to the place of Mary in the Episcopal Church.  Overall, taking it for what it is, I found it to be a good and helpful publication.  I am pleased that it provides information about the Society of Mary; hopefully some interested readers of the pamphlet will be encouraged to seek out the Society, which would prove to be a helpful resource for clarifying or correcting any issues that could arise from what I consider to be the pamphlet's shortcomings.  In truth, though, those shortcomings can be adequately addressed by simply turning to the Catechism of the Episcopal Church (BCP pg. 849) wherein we find this beautifully succinct explication of the mystery we confess in the Creed:


Q.  What do we mean when we say that Jesus was conceived by the power of the Holy Spirit and became incarnate from the Virgin Mary?

A.  We mean that by God's own act, his divine Son received our human nature from the Virgin Mary, his mother. 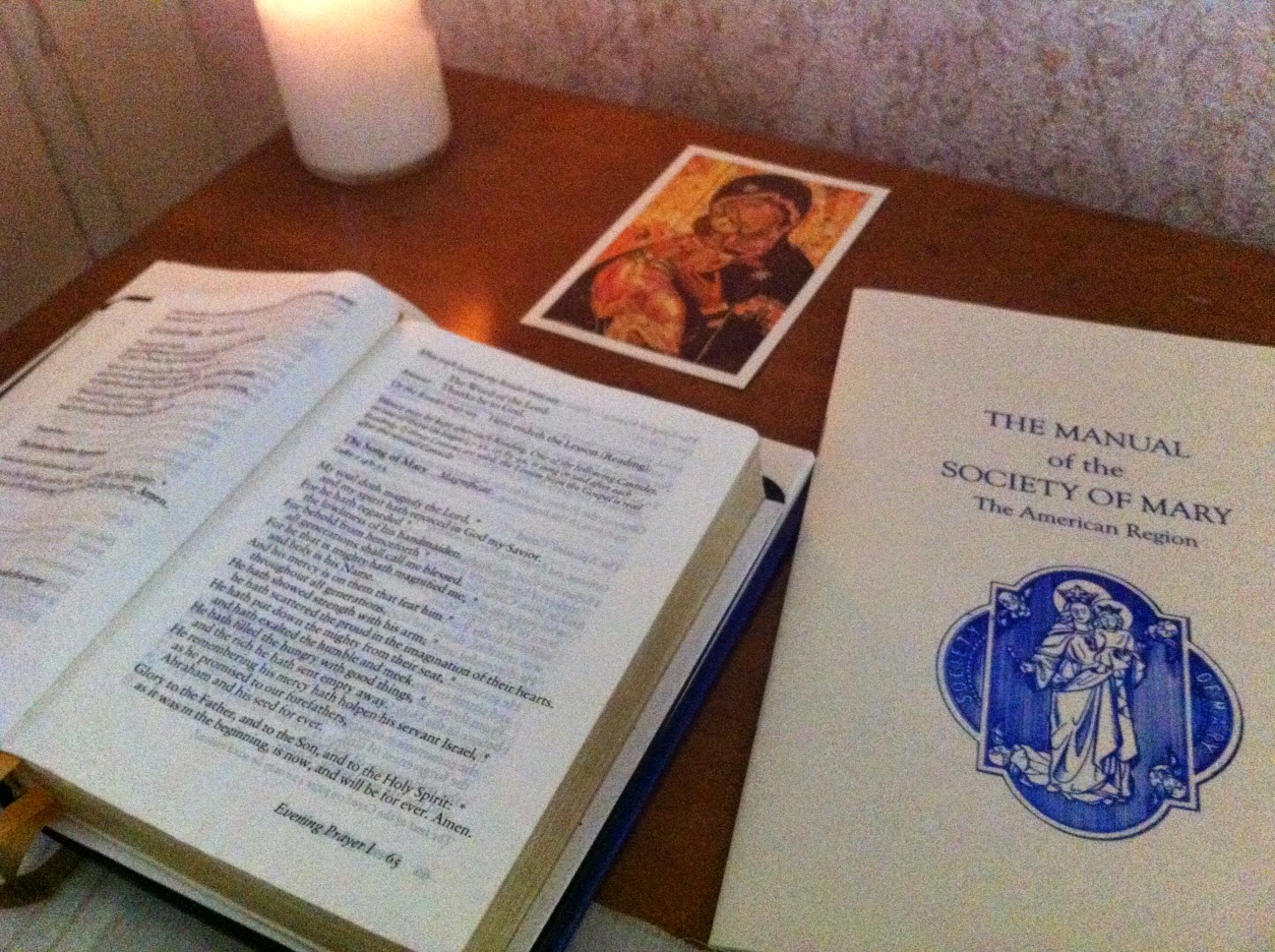