Musing on Literature and T.S. Eliot's "Journey of the Magi"

All this was a long time ago, I remember,
And I would do it again, but set down
This set down
This: were we led all that way for
Birth or Death?  There was a Birth, certainly,
We had evidence and no doubt.  I had seen birth and death,
But had thought they were different; this Birth was
Hard and bitter agony for us, like Death, our death.
We returned to our places, these Kingdoms,
But no longer at ease here, in the old dispensation,
With an alien people clutching their gods.
I should be glad of another death.
~ from Journey of the Magi by T.S. Eliot

In keeping with my resolution to read and reflect over more poetry this year, I recently returned to this perennial favorite.  Lent is fast approaching, but it is still Epiphany season, and so a fitting time to read Journey of the Magi.  (You can hear Eliot read it himself by clicking here.)

Last weekend I attended the wonderful annual symposium sponsored by the Eighth Day Institute in Wichita.  A theme that was touched on by several speakers in different ways was that of allowing the written word to speak for itself.  That is to say, whether in a poem, a short story, or a novel, good writers do not hide the meaning locked away behind a maze of words.  The words are not something to be figured out in order to arrive at a definitive solution, as in an algebraic equation.  The word itself is the message; the poet says what he wants to say in the words of the poem; the novel means what the novelist wrote (if she had wanted to say something else, she would have written something else).  Incidentally, one of the speakers observed that this approach to literature is thoroughly incarnational.  Jesus, the eternal Word, does not offer cryptic sayings to point us to the truth; rather, He is the Truth.

Such a view of literature, to my mind, elicits two quite different responses.  One might say that there is no value at all in analyzing any writing, since there is nothing more to be said.  But I think one might also say, on the contrary, that while the word simply is, it can lead one in any number of directions.  Precisely because there is no scientifically deduced correct interpretation of the true meaning of a poem, one is freed to allow the poem to speak whatever it will to each individual.  In this light, the same poem may speak quite differently to two different readers, and each may nonetheless be enriched and feel their reading to be legitimate.

Eliot's Journey of the Magi is not, in my opinion, a difficult poem to read and understand (though many of his other poems are).  And yet the final line does puzzle me.  I should be glad of another death.  I'm not sure what Eliot was thinking when he wrote that, but as I've just stated, that's not really the point.  What I do know is that the line gives me cause for reflection, because I can imagine at least three thoroughly different ways of understanding it.  Having experienced the manifestation of the Christ Child, the life of the magus has shifted irrevocably.  Even now, many years after the event, the magus ponders it, seeks to make sense of it.  He "would do it all again", despite the fact that "this Birth was hard and bitter agony for us, like Death, our death."  I should be glad of another death.  Was the experience such an agony that the magus wishes it could have been otherwise, that the revelation of this discomfiting, life-altering truth had come in some gentler, less painful fashion?  But what could be gentler than a child in the arms of his mother?  Or was the experience so sweet, so incomparably beautiful, that the memory of it haunts him still, moves him with a desire to go back and make that journey again?  Oh, to experience again this "death" that was the beginning of true life.  But perhaps the magus is not looking back at all; perhaps he looks forward.  Perhaps he now eagerly awaits the death that comes to all men, for he has realized that it is only by that death that he will enter into the new dispensation, and there find himself at home. 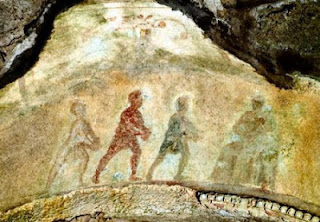